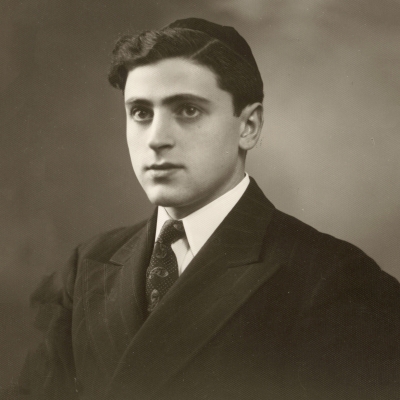 Joseph Lazar was born in 1924 in Vienna (Austria) to an Orthodox Jewish family. Soon after the Anschluss, the annexation of Austria by Germany in March 1938, the family business was confiscated and shut down. Fearing for their children's safety, Joseph's parents sent him and one of his sisters on a ship for England as part of the Kindertransport in December of that year. His other sister fled to Palestine, and his parents escaped to Riga (Latvia). After the German invasion of Latvia in June 1941, the Russians deported Joseph's parents to Siberia and his mother was killed. From 1940 to 1942, Joseph was imprisoned as an enemy alien in England and later in Canada, due to his Austrian nationality. In Canada, he was interned at Camp T in Trois-Rivieres, Quebec; Camp B in Ripples, New Brunswick; as well as at Fort Lennox on Île-aux-Noix, Quebec. A talented artist, Joseph sketched daily scenes of his experience in camp.

When he was released from internment, Joseph studied in a yeshiva (an Orthodox Jewish school) in Toronto and Montreal, learning the Talmud and Torah religious texts. Joseph's father, who survived the war, found his children and joined them in Montreal in 1948. Joseph started a business making diamond-manufacturing tools in 1954, and he ran the successful business well into his 80s. He married in 1959 and had five children and many grandchildren and great-grandchildren. He was also one of the founders of the Gan Israel summer camp for yeshiva boys, and designed the logo for the camp. Joseph died in 2009.