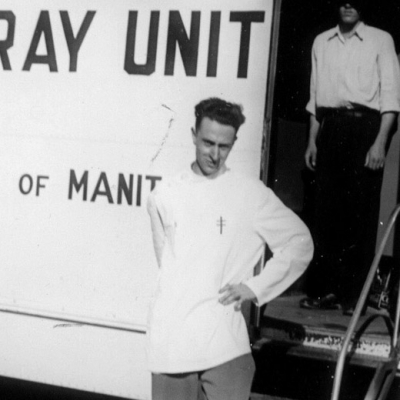 Stefan Carter was born in 1928 in Warsaw (Poland). When the Germans invaded Poland in September 1939, his family faced increasing persecution and was forced to move into the Warsaw ghetto in 1940. Despite the ghetto's restrictive and horrible living conditions, Stefan continued his education by attending secret school lectures and music concerts. On September 6, 1942, Stefan's mother was separated from him during a round-up and deported to the Treblinka killing centre. Stefan escaped the ghetto that same year with help from cousins, and he spent two years in hiding with false papers outside the ghetto walls. After the failed Warsaw Uprising in 1944, Warsaw residents were deported to a large transit camp in Pruszków (Poland). Stefan was assigned to a farm in the countryside, and he stayed there until liberation.

In 1946, Stefan went to a displaced persons camp in Munich (Germany) with his aunt Pola and uncle Edmund to join his cousin Zdzich – his only surviving relatives. Stefan was sponsored by the family of a Canadian nurse, Etta Brenner, who worked for the United Nations Relief and Rehabilitation Agency in Germany, and he immigrated to Winnipeg in 1948. He graduated from medical school at the University of Manitoba and spent over 40 years on staff in the Faculty of Medicine. Stefan assisted in the province's first open heart surgery in 1959. He and his wife Emilee raised their sons, Joel and Andrew, in Winnipeg.