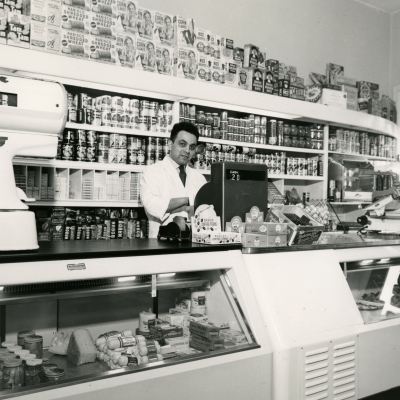 David Shafran was born into a large Orthodox Jewish family in 1923 in Dubeczno (Poland). When the war broke out, he was living in Lublin (Poland), and returned home to find his two brothers. Together, they went to the Soviet side of the small border town and were deported to a labour camp in Siberia. David and his brothers were released in the summer of 1941. They tried joining the Polish division of the Red Army in Tashkent (Uzbekistan) but were turned away because they were Jewish. David returned to Poland in the summer of 1944 and learned that everyone in his large family, other than his brothers, had been killed.

After the war, David and his brothers remained in Poland for one year and eventually went to stay in a displaced persons camp in Munich (Germany). His brothers went to Israel, and David obtained a visa to immigrate to Canada. He arrived in Vancouver in 1949, and the Canadian Jewish Congress helped him find accommodations and training as a tailor. In 1950, David took over Max's Deli & Bakery and ran the business until 1975. He married and raised two children in Vancouver, and co-founded the Vancouver Holocaust Education Centre in 1983. David died in 2001.