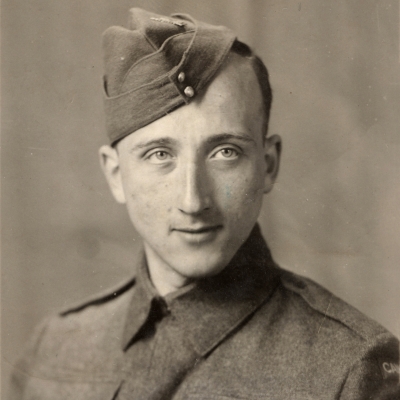 Gerhart (Gerry) Maass was born in 1919 in Hamburg (Germany), the youngest son of Adolf Maass and Käthe Elsbach. His father worked as manager and partner of the large shipping company Kuehne and Nagel. As a teenager, Gerry began working as an apprentice at an import business in Germany, with the hope that he would someday be transferred to Canada and escape Nazi persecution. In 1938, Gerry managed to immigrate to Canada and work at the Montreal branch of his company. He tried to help his parents join him in Montreal, but it was impossible for them to obtain visas. Gerry enlisted in the Canadian Army in early 1943. He completed his military training, and through a special order-of-council from Parliament, was granted Canadian citizenship. He served overseas with the Canadian Intelligence Corps and was stationed in France, Holland, and Germany.

After the war, Gerry returned to Hamburg to find out what happened to his parents and the family business. The business assets had been entirely taken by the government. He learned that after being sent to the Theresienstadt ghetto, his parents were deported and murdered in Auschwitz in 1944. Gerry returned home to Montreal in September 1946. He married a few years later, and had two children. In Montreal, he served as the District Commander and President of Branch 14 of the Royal Canadian Legion. He was also a Justice of the Peace. Gerry died at the age of 90 in 2009. The collection of his objects and documents, donated by his wife Joan in 2010, was the largest fonds received by the Montreal Holocaust Museum.