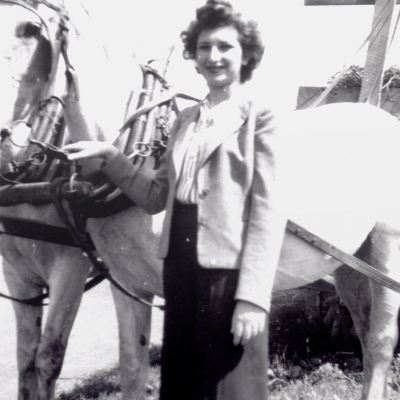 Minna Loewith was born in December 1922 in Skytaly, a small village about 100 kilometres from Prague, in Czechoslovakia.  When she was very young, the family moved to the Czech city of Blisova, where her father managed farm properties for wealthy landowners.  Minna and her sister Hannah attended German school for two years, and later continued their education at a Czech school. Minna dreamed of being a nurse. Outside her immediate family, there were no other Jews living in the town. When she was 16 years old, Minna and her family managed to immigrate to Canada as refugees from the recently German-occupied Sudetenland region. Her uncle Karl Abeles obtained farming permits for 39 people, which included Minna's family, uncles, aunts, cousins, as well as her future husband Joe. The group arrived in November 1938 and spent their first winter at a farm near Mount Hope, a village just south of Hamilton, Ontario.

In 1942, Minna married Joe Loewith and they rented a chicken farm for a few years. In 1947, nine years after arriving in Canada, they purchased the Summitholm Holsteins farm outside Hamilton, Ontario, and began a very successful career in dairy farming. In its early days, Minna and Joe operated the farm with only 16 cows. Their sons continue to run the business today.