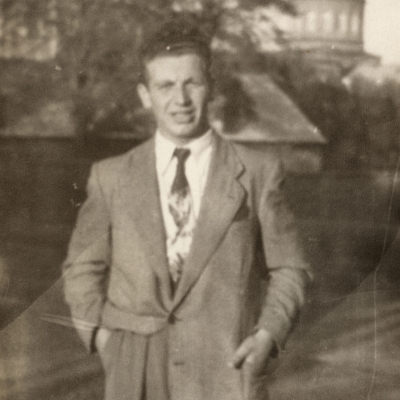 Paul Herczeg was born in 1930 in Újpest (Hungary). His parents were proud Hungarians and traditional Jews, and Paul and his sister were raised in this environment. As a young boy, Paul joined the Jewish Boy Scouts Association and participated in many sports and cultural activities at school. When the Germans invaded Hungary in March 1944, Paul and his family were forced to move into the Újpest ghetto. One of his earliest memories of feeling different, and targeted as a Jew, was the first day that he had to wear a yellow star in public. He would later recall that the experience was one of the most traumatic events in his life. In July 1944, Paul and his parents were deported to the Auschwitz concentration camp. Paul's mother was murdered, and he and his father were transported to a small camp near Mühldorf (Germany) to work as slave labourers. His father died from overwork and starvation. Paul was sent to work in the camp kitchen; the heating in the building and the potato peels he hid under his clothes saved his life.

In May 1945, Paul was liberated by the Americans near Tutzing (Germany). He spent a few months in the Feldafing DP camp, and later went to Weilheim (Germany) to play on a competitive soccer team for two years. Paul arrived in Canada through the War Orphans Project and moved to Montreal in January 1948. He began his career working as a tailor, and in 1970 he set up his own retail business. He married in 1958 and his daughter was born in 1962. Paul is an active volunteer at the Montreal Holocaust Museum since the founding of the organization and meets with students regularly to talk about his experience during the Holocaust.