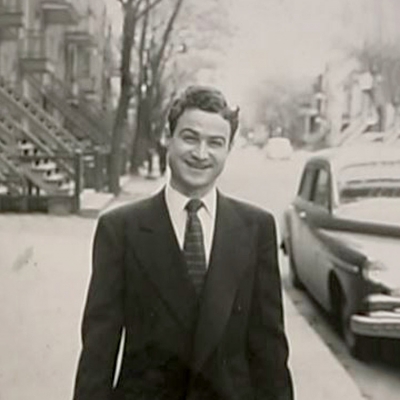 Leon Hirsch was born in 1931 in Rawa-Ruska (Poland; today Ukraine). His parents sold wholesale produce and cattle. Leon's family was forced to move into the ghetto when the Nazis occupied Poland, and his father was sent to a labour camp. In 1942, his parents were deported to the Belzec killing centre. At only 10 years old, Leon managed to escape the ghetto with his brother and they went to hide on a farm. One day, Leon's brother left to find food and never returned. While lost trying to find his brother, Leon was rescued by a priest and given a place to stay for three weeks. He eventually found his sister and brother-in-law in Zagrina (Poland). They dug a bunker in the forest outside the town, and hid there until liberation in 1944.

After the war, Leon and his sister returned to their home town but discovered that a Polish family had taken over their home three years earlier. They went to a displaced persons camp in Bamberg (Germany) and lived there for three years. The United Nations Relief and Rehabilitation Administration (UNRRA) provided food, shelter, and education. Leon immigrated to Canada through the War Orphans Project in December 1948. He and his friend stayed with a family in Regina, Saskatchewan. After a year, Leon moved to Montreal and began his career as a furrier. He married in 1964, had two sons and several grandchildren.