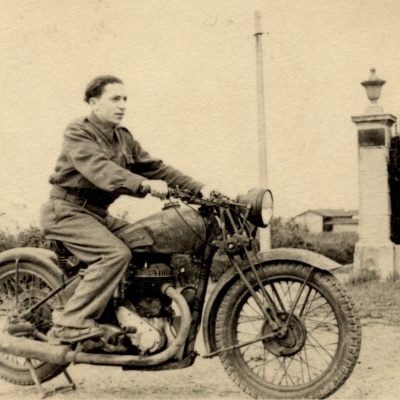 Michael Kutz was born in 1930 in a small Polish village called Nieśwież (today Nesvizh, Belarus). At the beginning of 1940, Nieśwież was annexed to the Soviet Union. All Jewish institutions in the village were closed, children were forced to take part in the communist youth movement, and many citizens were arrested for their political and ideological affiliations. In June 1941, the Nazis invaded Nieswiez. The Einsatzgruppen murdered most of the Jewish population in October of that year. Michael survived the mass murder but lost his entire family. He hid in a farmer's attic throughout the winter of 1941. In April 1942, Michael joined a partisan group and participated in several military missions until the end of the war.

After liberation, Michael returned to Nieswiez but found no relatives. He and fellow Jewish survivors from the village placed a monument on the mass graves in memory of all the Jews who were killed. In 1948, Michael immigrated to Canada as part of the War Orphans Project. He spent his first year in Winnipeg, and later settled in Montreal, getting married in 1984. Michael has been an active volunteer at the Montreal Holocaust Museum, as well as the Knights of Pythias organisation, visiting with children and the elderly at community centres and hospitals. He was honoured with a medal from the Governor General of Canada in 1992 for his contributions to his community and to Canada.