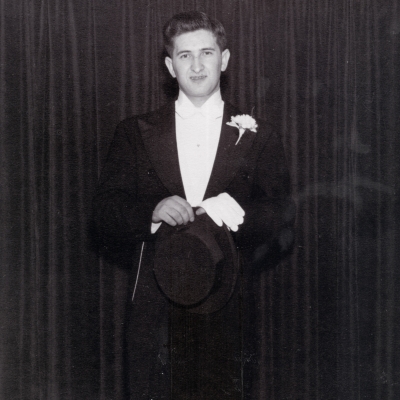 David Mark was born in 1930 in Horincovo (Czechoslovakia; today Ukraine), a region that was annexed to Hungary in 1939. In the spring of 1944, David and his family were deported to Auschwitz, where his mother and one of his sisters were murdered in gas chambers upon arrival. David was transferred to work at a coalmine near Auschwitz in 1945, and then sent to the Dora-Mittelbau camp to assemble missiles in an underground factory. Following the camp evacuation, he was forced on a death march to Bergen-Belsen camp. There, David was reunited with his sister Ruchel. When Bergen-Belsen was liberated by the British army in April 1945, they went to a displaced persons camp in Celle (Germany). David travelled to Budapest (Hungary) to visit his brother, who had also survived the war. He later stayed with Ruchel in Czechoslovakia and received training as a watchmaker's apprentice.

David came to Canada in 1948 through the War Orphans Project. The boat docked at Pier 21 in Halifax on a Friday afternoon. Since the group of war orphans could not travel by train during Sabbath, David was billeted overnight with a Jewish family in Halifax. He met two brothers the next morning who owned a jewellery store, and David was instantly offered a job because of his watchmaking skills. He accepted the offer, remained in Halifax, and met his future wife, Marilyn, only days later. David and Marilyn married in 1952 and worked together in the retail clothing industry for 40 years. They had two children. The Marks were presented with a plaque from Halifax City Council acknowledging their years of service in the community. When they moved to Toronto in 1992, David became more active in Holocaust education programs. He died in 2011.