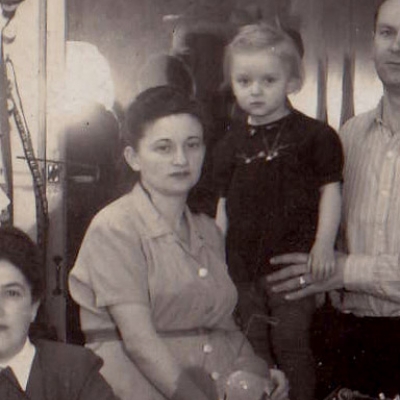 Mania Kay was born in 1920 in Oświęcim (Poland). Soon after the Germans invaded Poland, Mania's family was forced into the ghetto. She witnessed the development and construction of the Auschwitz concentration camp and was sent to work there occasionally. In 1940, she and her family were deported to Sosnowiec (Poland). Mania worked in a factory manufacturing shirts for the Germans, and after a year, was forced to move into the ghetto where she met and married her first husband.  In August 1943, the Sosnowiec ghetto was liquidated and Mania's family was deported to Auschwitz-Birkenau. She was separated from her family and husband upon arrival, and never saw them again. Mania worked as a slave labourer carrying stones and building roads, and was later transferred to the German Siemens factory.  In January 1945, she was forced on a death march to Gliwice (Poland), loaded onto a cattle car, and taken to the Bergen-Belsen camp. She was liberated by the British in April of that year.

After liberation, Bergen-Belsen was turned into a displaced persons camp and Mania stayed there with her new husband and their daughter for three years. In October 1948, they immigrated to Canada through the Tailor Project, a program initiated by the Canadian Jewish Congress. Mania's family settled in Kitchener, Ontario, where her brother-in-law lived, and the family opened the Kay Brothers tailor shop on King Street West. Mania dedicated her life to Holocaust education in Kitchener and played a key role in establishing the Waterloo Region Holocaust Education Committee. She died in 2012 at the age of 92.