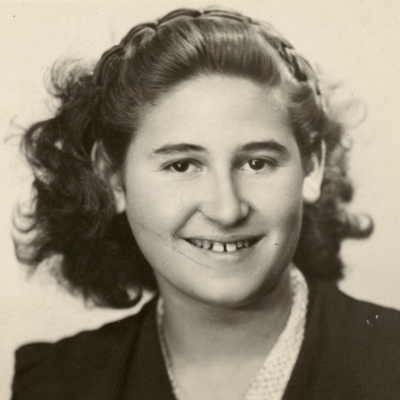 Helene Goldflus was born in 1931 in Paris (France). Her family lived a normal life until the Nazi occupation of Paris in June 1940. In May 1941, Helene's father was taken away and the family never saw him again. Her mother, who was pregnant with twins, was brought to the hospital, and Helene and her brother were taken in by their neighbours. When the Gestapo began searching homes for Jews, the French Children's Aid Society (OSE) brought the children to hide in separate convents outside Paris. Helene was in a convent for 3 months, and was taken to a farm afterwards, where she stayed until the spring of 1942. She found her brother at another farm near Arquian (France), and together they lived with a family for three years.

After the war, Helene and her brother returned to Paris and were reunited with their mother. Their twin brothers, born in 1941, had lived with a non-Jewish family during the war and their mother re-gained custody of them in 1947. They moved to Toronto and lived with Helene's aunt and uncle. Helene had a difficult time adjusting to Toronto and the English language. She joined Jewish youth groups and developed a strong network of friends. She got married in 1951 and had four children. Helene worked as a French teacher for the Toronto School Board and has volunteered with several Jewish organisations throughout her life.