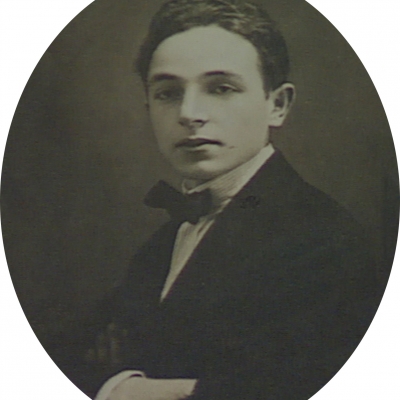 Joseph Klinghoffer was born in 1903 in Radautz, a town located in the Austro-Hungarian Empire (today Romania). He grew up in Lwow in Poland (today Lviv, Ukraine) and graduated from the University of Vienna. Before the war, Joseph was in charge of the entire language curriculum across the Lublin province in Poland. When the Germans occupied Lwow in June 1941, Joseph and his wife Gisela fled to Warsaw and lived under false identities. Joseph worked in underground schools organised by the Polish resistance and was hired to translate nightly BBC broadcasts for the Polish underground press. After the failed Warsaw Uprising in 1944, Joseph and Gisela fled to Pruszkow, Poland, and remained there until Soviet liberation. Joseph was the only survivor from his family.

In June 1945, Joseph and Gisela made their way to the American-occupied zone of Austria and spent two and a half years living in the Salzburg displaced persons camp. Joseph worked for Jewish Immigration Aid Society (JIAS). He was selected to come to Canada through the Tailor Project, a program initiated by the Canadian Jewish Congress and supported by the government in 1947. Joseph and Gisela arrived in Halifax in 1948 and settled in Toronto. He worked as Director of Education and Culture for the Canadian Jewish Congress for 23 years. Joseph died in 2000 at the age of 97.