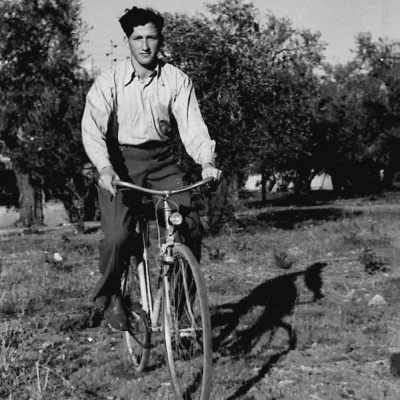 Moishe Kantorowitz was born in 1923 in the Jewish shtetl, or village, of Shereshev (Belarus). When the Germans occupied the town in June 1941, his family was forced to leave. They managed to sneak into the Pruzhany (Belarus) ghetto and lived there for two years. In 1943, the ghetto was liquidated and Moishe and his family were deported to Auschwitz-Birkenau. He was separated and never saw his family again. Moishe worked a slave labourer in a German repair shop and later in a carpenter shop. In January 1945, he was forced on a death march to the Mauthausen concentration camp, and transported to a sub-camp to work in an ammunition factory. The US army liberated the camp in May 1945.

After the war, Moishe stayed in displaced persons camps in Austria and Italy. In 1948, he obtained a visa to immigrate to Canada as a farmer. He bought and ran a farm near Brockville, Ontario, for two years. Moishe married in 1950. He and his wife moved to Montreal, opened a delicatessen in the Jewish Quarter, and had three children. In 1956, Moishe was offered a job as a travelling wholesaler in St. John's, and the Kantorowitz family joined a small but flourishing Jewish community in Newfoundland. Moishe dedicated much of his life to Holocaust education and shared his story with students throughout Newfoundland for 40 years. He was granted an Honorary Degree from Memorial University for his volunteer work in Holocaust education. Moishe died in 2008 at the age of 84.